Skip to content
HOME
/
News
/
“You have a duty to expose the truth,” journalists urged as AIJC2020 kicks off

The maiden virtual edition of the African Investigative Journalism Conference (AIJC2020) kicked off on Tuesday, 06 October, with panelists calling on journalists across the continent to “expose the truth”.

This year’s conference, which runs from October 06 to 30, and is held virtually following health concerns from the Coronavirus (Covid-19) pandemic, is the 16th edition of the annual conference.

The opening session, moderated by Anton Harber, Caxton Professor of Journalism from the Journalism Department of the University of the Witwatersrand in Johannesburg, South Africa, spoke to two of the continent’s leading investigative journalists, Anas Aremeyaw Anas from Ghana and South Africa’s Jacques Pauw, about their recent work, among others.

Speaking at the opening session of what is billed as Africa’s biggest annual gathering of working journalists across the continent, Anas said that journalists “have a duty to expose the truth” always, adding that during the pandemic African journalists left their beats and focused mainly on Covid-19 leaving a gap for politicians and criminal to conduct their activities brazenly.

“While we cocooned ourselves in our houses during the lockdown, the politicians and thieves were watching and they took over,” said Anas.

He also referred to his investigative report on Covid-19, noting that “busy criminals were selling ‘cures’ to the rural poor” in the guise of miracle remedies for Covid-19.

He charged the public to ensure that journalists are protected against all forms of abuse, especially by state actors.

“…a reality check, when you carefully analyse what has been happening on the continent, you’ll realise that we have lots of issues.

“Journalists themselves were subjects of abuse. When you look at Nigeria, our brother Sikiru Obaraye got attacked by the police while covering Covid-19 during the lockdown. Also, the same happened in South Africa to Paul Nthoba who was arrested for photographing police officers during the Covid-19 lockdown,” Anas said.

He further warned the hundreds of investigative journalists attending the conference from across Africa, to thoroughly investigate Covid-19 but to never take their focus off other important societal issues.

Also speaking on the power of the investigative journalism work, Jacques Pauw, a veteran South African journalist and best-selling author of The President’s Keepers which exposed state capture during the tenure of former South African President Jacob Zuma, said, “Over the past few years, gangsterism and criminality have flourished; extra-judicial killings have spiked while white-collar criminals steal with impunity.” 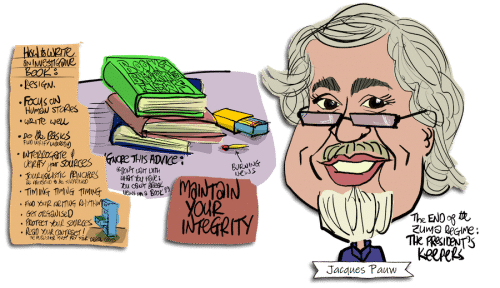 He noted that books, like other forms of media, play a critical role in speaking truth to power and digging out hidden truths. He advised investigative journalists to strongly consider writing books and fashioned his keynote speech into a master-class on successfully publishing non-fiction books.

“Books have firmly established themselves as vehicles of investigative journalism.

“Book figures at the moment shows that non-fiction books, especially with news and current affairs titles, dominate the non-fiction markets.

“This is obviously the result of how absolutely chaotic our political landscape is. Readers are trying to make sense of what the hell is going on out there,” said Pauw.

He urged journalists to tell their investigative stories in a factual and compelling manner, adding that “writing an investigative book must embrace the importance of human narratives.”

“It is important to get your facts checked while writing your book. You need to speak to and interrogate your sources multiple times.

“When I started out writing books I was thinking as a journalist. When writing a book, you need to think commercially for it to be financially viable,” he added.

The duo also charged African journalists to hold African leaders accountable to the populace who they govern, including exposing their wrong doings.

They further urged journalists to verify their facts before going public with their investigative reports.

A “live” cartooning or caricature of the discussions by digital sketchnoter, Roy Blumenthal, also added glamour to the event by aiding visual and mental understanding of the discourse by the speakers.

Opeyemi Kehinde is a Nigerian multimedia journalist, Assistant Editor and Deputy Team Lead of the FactCheckHub. Until recently, he was an Assistant Online Editor for the Daily Trust.

Kehinde is an AIJC2020 Fellow.