Anas Aremeyaw Anas from Ghana is legendary both for his investigations and his persona. Not only does he operate by the motto “name, shame and jail” but he also hides his face on camera to protect his identity and safety by wearing a variety of caps with a beaded curtain. For one-on-one interviews, his team wear hidden cameras.

The Covid-19 pandemic has led to corruption and in the BBC Africa Eye documentary, Corona Quacks, which premiered on BBC News Africa on 29 June 2020, Anas set out to expose bogus doctors selling fake medicines found to be toxic. More than 250 000 people have viewed the documentary on YouTube.

Away from the public eye, and minus his characteristic beaded disguise, Anas is softly spoken as he talked about the context of his investigation: “The modus-operando of these quacks was to look for vulnerable people and take advantage of uneducated rural people.

“They told people to take these medicines as a preventative measure because they said everybody would get Covid. These people swallowed this information hook, line and sinker,” he said.

They also lied about claims of famous people and celebrities to endorse their products, such as the wife of the vice-president of Senegal when in fact that political position does not exist. 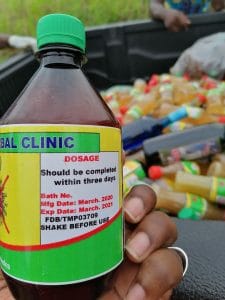 When Anas took samples of these concoctions to the Ghana Food and Drugs Authority (FDA) for testing, they were found to have fake registrations and were in fact unfit for human consumption. Professor Gordon Akanzuwine Awandare, parasitologist and Director of the West African Centre for Cell Biology of Infectious Pathogens, said these so-called cures contained bacteria such as  e-coli and fungus “too high to be counted” as well as phosphine – a toxin containing nitrogen and arsenic.

It’s no wonder that the medicine labels had warnings such as “use within two weeks’’. “use within three days once opened” and “may cause diarrhoea and other gastric upsets”, because “the longer the medicine stands, the more toxic it becomes,” warned Professor Awandare.

One bogus doctor interviewed, “Dr” Abdellah, said he was waiting for the FDA to approve his medicines, but claimed that they were so effective, “some patients with Covid left the hospital to take this ‘medicine’ and were cured”. He also boasted that his medicines do not need trials because enough people had given them positive testimonials. Samuel Ato Duncan, who manufactured COA FS, punted as a dietary supplement, said it was an “organic supplement” , while Ben Amodu alleged his cure was an “oral covid vaccine”.

To disprove these claims, Anas interviewed professional doctors. Professor Awandare said the claims made by bogus doctors were simply “not possible”.  Dr Borte Bornmainsaid bogus practitioners are a doctor’s “worst nightmare”. Delese Mimi Darko, pharmacist and CEO for Ghana FDA, confirmed that, to date, there have been no registered cures for Covid and that under FDA Ghana law, distributing unauthorised drugs is a serious crime.

In just under 24 hours after Anas reported his findings to the FDA, they searched the Abdellah brothers’ premises. Although the brothers claimed that they were not selling their product, more than 300 bottles were confiscated, a number seemingly too high to be test samples waiting for registration, as they claimed.