After it was confirmed that 160 people died and hundreds were injured within the three years since the Mauritanian authorities allowed its citizens to prospect for gold in the heart of the desert, investigative journalist Abu Bakr Salem set out on a 2 000km journey to find what was behind the carnage.

His investigation, for Al Jazeera and Arab Reporters for Investigative Journalism (ARIJ), revealed that the deaths and injuries were due to easily obtainable mineral extraction licenses and lax safety protocols.

While the Mauritanian government opened the door for gold mining and made good money out of issuing licenses, it ignored the need for basic qualifications for the prospectors. To illustrate the flaws in the system, reporters applied for a mineral extraction license; without any type of experience in mining, they found a license was simple to obtain.

“Thousands of Mauritanians left for the desert hoping to get rich quickly by prospecting while working in dangerous and harsh circumstances,” said Salem. 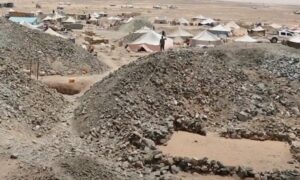 Two days after the investigation, Death License, was broadcast on aljazeera.net on 14 August 2020, the government-affiliated company issued a statement saying that it would carry out reforms regarding the prospectors, and distributed some equipment, but this is not enough and there are still many problems that gold prospectors suffer from in the Mauritanian desert.

“Going to the Mauritanian desert and producing the video reportage was a great adventure for me as a young reporter. I spent 10 days with the prospectors and witnessed first-hand how an untrained person might be at risk working in that isolated environment, exposed to hunger and thirst,  injury or accidental death,” said Salem.

A Mauritanian national, Salem started his journalism career in 2011 and is based at the ARIJ Network in Jordan where he specialises in investigative reporting.

Death License won third prize in the 2020 ARIJ Annual Awards, which honours “Arab journalists who take on scathing criticism, face reluctant sources, and risk retaliation, to bring to light corruption and injustice in their societies”.