In 1993, Nigeria’s federal government established the National Gallery of Art (NGA) with headquarters in the capital city of Abuja to collect, preserve and document Nigerian contemporary art.

A whistleblower alleged that directors at the NGA had misappropriated over N200million (R7million) released to construct galleries in the states of Taraba, Niger, Anambra and Imo over a 10-year period. Eight years since the NGA had announced the building of these four galleries, none were near completion or open for business. 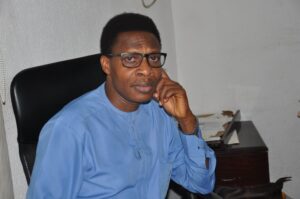 Ajibola Amzat, editor of the International Centre for Investigative Reporting (ICIR) in Nigeria, who has a Master’s degree in Journalism and Media Studies from Rhodes University, and another in Data Journalism from Columbia University in New York, investigated the allegation, assisted by Damilola Ojetunde and Samad Uthman.

National Gallery of Graft: How former DG, others misappropriated public funds was published on ICIR’s website on 1 February 2021, a rare topic of investigation in Nigeria where very little has been reported about such neglected art projects.

The investigation uncovered a discrepancy between the records of the Office of the Accountant General of the Federation (OAGF) and the NGA that revealed misappropriation of funds had occurred in tranches over years.

N394million ($959,683) had disappeared from the NGA over six years while Abdullahi Muku had been its Director-General (DG).

The ICIR also obtained a petition that accused Muku and Dr Simon Ikpakronyi, immediate past Acting DG of the NGA, plus other directors, of “diverting” an additional N359million ($874,432) meant for research and other educational projects.

Muku denied any wrongdoing, telling the ICIR he had left the office honourably and that if he deserved anything, it was “a commendation for my achievement while I served the nation my fatherland as DG, NDA.”

“Several delay tactics were deployed to discourage the continuation of the investigation,” said Amzat.  This included government agencies being reluctant to verify and provide relevant documents.

The NGA, through its media relations officer, appealed to Amzat to discontinue the investigation. When his appeal fell on deaf ears, he called Amzat’s former colleague to try and get him to persuade Amzat to stop probing further.

Following the publication of the investigation, the new director-general of the NGA mobilised workers to complete the construction of one of the abandoned galleries. He also reportedly paid journalists to publicise the completion of the gallery as a way of counteracting the earlier investigation, Amzat said.

The whistleblower informed Amzat that the Economic and Financial Crime Commission (EFCC) had called in Muku to explain the financial discrepancies.

SOMETIME in November, a Nigerian Professor of Art History, Moyo Okediji, announced on Facebook that he was building an art gallery in Austin, Texas, United States. He wrote that the gallery is nearing completion and would hopefully be ready by January 2021. That is a timeline of about three months

Eight years earlier, the National Gallery of Art, an agency under the Ministry of Information and Culture, made a similar announcement to build galleries in Taraba, Niger, Anambra, and Imo states. To date, none of the galleries are near completion, let alone open for business.

In fact, the general assumption is that the government does not fund art due to a paucity of funds and zero interest in creative works. While this claim may be valid, it is often exaggerated.

The federal government in 1993 established the National Gallery of Art with headquarters in  Abuja and branches in the six geo-political zones of the country, to collect, preserve and document the Nigerian contemporary artworks.

Inside sources allege that directors at the Gallery have misappropriated over N200 million released for the construction of galleries in the four states, all within a period of 10 years, misconduct that contravenes the Procurement Act 2007 and Finacial Regulations 2009.

While investigating this claim, The ICIR discovered that the directors also have failed to account for N394 million within the same period, according to the record obtained from the Office of the Accountant General of the Federation, OAGF.

The ICIR compared records obtained from the OAGF with records of the National Gallery of Art.

While OAGF’s records show that the Gallery was paid a total of N2.7 billion in capital allocation in the last 10 years, the Gallery could only account for N2.3 billion, showing that nearly 15 percent of federal funding has gone missing in one decade.

But the money did not disappear in one single tranche.

Except for three years (2015, 2016, and 2019), when the records of a capital allocation from OAGF correspond with the documents tendered by NGA, the books are not balanced for the other years.  So, how did over one-third of a billion naira disappear?

The ICIR wrote FOI letters both to the Gallery and OAGF seeking an explanation for the missing fund. The Director of Funds at the OAGF, Sabo Mohammed, in his reply, wrote that: “The Office of the Accountant -General of the Federation had cash-backed in full all the Capital Allocations released to National Gallery of Art within the period requested.”  In other words, capital projects at the Gallery for which funds were released have all been paid for.

However, Mohammed directed the reporter to the Budget Office and Cash Management Department of the Ministry Finance for further confirmation.

In an interview, Muhammad M. Saleh, the Director at the Cash Management Department, told The ICIR that the office was created in 2018, so it was responsible for disbursement only for the last two years.

“The Accountant General Office was directly responsible for the disbursement between 2010 and 2018, and whatever record given by the Office is accurate,” he said.

The ICIR then contacted Abdullahi Muku, the Director-General of the National Gallery between 2010 and 2019, for clarification.

In a WhatsApp message sent to The ICIR on 13 November 2020, he wrote: “I left office honourably. I was highly celebrated when I was leaving. I should please be allowed to manage my life. If there is anything that I deserve, it is a commendation for my achievement while I served the nation my fatherland as DG, NGA.”

Not satisfied with the response, The ICIR requested that he answer specific questions about the allegation of misappropriation levelled against him.

On Wednesday, November 18, 2020, Muku showed up at the Abuja office of The ICIR, where he was asked to explain the disappearance of N394 million in six years.

The former DG told The ICIR that he could not explain the difference because he is no longer in service.

“I have left the office since March 2019; I no longer have a recollection of the money received and money spent,” he said.

When shown the records of capital allocations obtained from his former office and the OAGF, he still could not offer a useful explanation.

Instead, he urged the reporter to dismiss “smear campaigns” launched against him by some Gallery staff members he described as “disgruntled elements.”

According to him, the allegation of corruption started while he was in office.

“They have used media to attack me and destroy my reputation. They have failed, and that is why they came to you too,” Muku said.

Colleagues have indeed petitioned the former Gallery boss, accusing him of stealing from the public purse, which, according to them, he successfully masterminded with other directors’ help.

According to the whistleblowers, the suspected accomplices include the immediate past acting director-general of the parastatal, Simon Ikpakronyi; director of finance and account, Henry Achugbu; retired director of document, Lilian Kangan and Adamu Tanko of Curational Service Department.

In the petition reportedly sent to the anti-graft agency, a copy of which was obtained by The ICIR, Muku and Ikpakoroyin, who was then the Director of Research and Publications, together with other directors, were accused of “diverting” another N359,000,000 between 2013 and 2019. The allocation was meant for research and other educational projects.

In 2018, just a year before Muku retired, N5 million was released to publish a compendium of artists, but publication does not exist to date.

When The ICIR asked about the publication, the former DG said he was unaware of the compendium.