The virtual edition of the African Investigative Journalism Conference (AIJC2020) entered its third day on Thursday, 08 October, with a call on media organisations to implement new business models that promote the sustainability of their organisations and the welfare of journalists to starve off challenges that confront investigative journalism in Africa.

Speaking during the session, Victor Bwire, a trainer and head of media development at Media Council of Kenya, shared an overview on the study he conducted around the mapping of non-public investigative centers in Africa. He said the study revealed a great interest in pursuing investigative journalism among African journalists, despite the dangers associated with the profession – among other challenges, and that it identified 25 centers across the continent whose work is ongoing, but has been delayed by the Covid-19 pandemic. 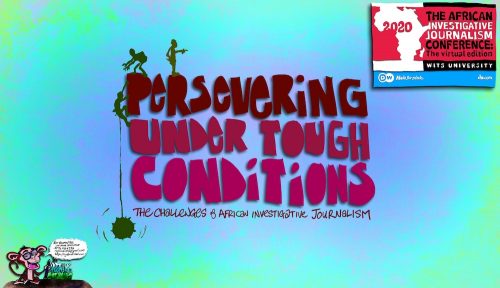 Using the ancient chicken and the egg paradox on which one comes into the world first, she likened the media to the chicken and good governance to the egg with the narrative that the media thrives under the conducive conditions of good governance and democracy and vice versa. She implored journalists to approach their work with humility.

On the way forward, Alaka said, “I think that we have to fix the economics of the media without jeopardising our ethics”, adding, “the values are important but the media has to be able to be sustainable”.

An award-winning investigative reporter from Egypt, Gehad Abbas, used the discussion to unveil difficulties that revolve round continued lack of freedom of information and state control in Arab African countries, despite the noticeable changes in Tunisia and Morocco.

She remarked: “There is freedom of information in a few Arab African countries. Good examples are Tunisia, which passed a law in 2016 to provide the right to get access to information, and also Morocco. But a country like Egypt, which has a population of 100 million citizens, has not taken such a step. This makes it hard to get information and further complicates matters for journalists.”

She gave an example of the challenges she faced while doing a story for the BBC called “Behind the Masks”, summing up her experience as ‘hectic’.

Also making a contribution, Adriaan Basson, editor in chief of Media24, in South Africa, said, “There is obviously a lot of challenges in the space of investigative journalism when you’re trying to reveal other people’s secrets.”

He gave the example of a Zimbabwean journalist, Hopewell Chinono, who was arrested for covering a story that exposed Covid-19 corruption involving the son of President Mnangagwa.

“That was the most disturbing development in our area in the last few months, and we are thankful that due to international pressure, he (Chinono) was released on bail”.

The virtual conference commenced on Tuesday, 06 October, and will be rounded up on Friday, 30 October.

Wole Elegbede is a Nigerian multimedia journalist and Project Director of Press Attack Monitor, a media platform that exposes press freedom abuses in Nigeria. He is an AIJC2020 Fellow.